Day 2 of Call to Arms followed on nicely from day 1. Now you are probably thinking thats a pretty redundant statement given that one day normally follows another, however in the tournament world you cannot guarantee that one days great games (and opponents) will follow through to the next day. In this case.... I am very happy to say that day 2 was just as much fun, and was definitely the icing on the cake!

I faced off (once again in no particular order):
eKaya - she had a massive pile of angry Wolves and basically kept Stealth up through the entire game. Kara and the Triumph put the hurt on, but the Hunters found themselves completely outmatched. We timed out last as a Warpwolf made its way into Kara's face.
pHaley - the Hunters did their thing and scattered which opened up a some firing arcs, Trumph's cannon to Haley's face (although it took a Hunter to finish her off).
Thyra - keen to face off against her as I have a 25pt T4 list that I want to build. Could not target the jacks thanks to the Choir so I worked over the support units. Managed to get the Hunters round the flanks and put 4 shots into Thyra (1 missed), and still she lived. Cornered her hiding behind a heavy jack that was 1 Defender shot from death, and with Kara ready to deliver the double tap when an unfortunate continuous fire effect killed Kara.

So.... 7 games, 1 win.... not a great record, but I finished with the rather comforting thought that I would have killed Rasheth if I had thought about it a little harder (even with -1 dice on ranged attacks, 3 non-boosted shots from Hunters, and a further 3 boosted should have put him on the ground) and the dice just not being with me against Thyra, and I think I would have had a pretty respectable result.

However there is definitely something to be said for having a great weekend, playing a bunch of great people and generally having fun, because not only is that a reward in itself, but sometimes you get recognised by your peers...
So, now its on to the Guardcon Battlebox tournament in October, then the debate about either adding to Kara or Karchev (or maybe Kaya since I have three Warpwolves and three Argus painted already...) to get a 50 point force ready for Rallypoint?!?!?!

Or maybe I should knock off my Dystopian Wars stuff before I start on yet another project...


Posted by Wargamer on Tour at 6:33 PM No comments:

It been a big day of gaming down here in Wellington! We played two games at 20 points and two at 30. Sadly the games have gone the way that I expected, with 4/4 loses.... Faced off against (in no particular order):
Rasheth - managed to clean out much of his force over to turns of shooting but found Kara's face being blown off through a couple of channelled spells,
Caine - just played like a complete moron, wasted my feat and lost through control points.
Madrak - Mulg to the face..... 'Nuff said.
Xerxis - large mob of Cetrati in shield wall combined with Defenders Ward and I just could not put them down.

Tomorrow morning I am fighting to retain m plc at the bottom o the table as I match off against the only other player with no wins.... Hopefully I'll have a bit more success to report.
Posted by Wargamer on Tour at 10:35 PM No comments:

Kara and her Rangers

With Call to Arms a couple of days away, I have managed to finish the last of my painting: Kara Sloan, Capt. Strangeways, Reinholt (everyones favourite Goblin and reloader of all things shooty!) and a unit of Rangers. I am not entirely happy with how they turned out, but they are ready for the weekend and a little bit of tidy up work (and some decals for the 'jacks) and I'll be satisfied.


Needless to say though, I am pretty excited about the weekend and either way I think it is going to be a blast as the Wellington Warmachine cowd seems (from all accounts) to be a pretty good bunch!

We all live on a Prussian Submarine

Had another game of Dystopian Wars tonight, definitely still getting our heads around the rules and remembering / working things out mid game. Based on the outcome my Battleship probably needed some guns mounted on it though! Of course a finished paint job would not have hurt either... Either way its a fun game and once Call to Arms has passed I'll be tackling these guys in an attempt to finish them off (as well as a few more islands since I have been volunteered to be "the terrain guy").

Kara Sloan and her Hunters III

Over the last week I had a minor epifhany realising that Call to Arms is only a couple of weeks away, so it was a big weekend of finishing up my 'jacks for Kara's Battlegroup.
﻿﻿﻿﻿﻿﻿﻿
﻿ 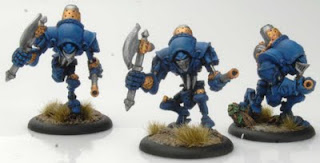 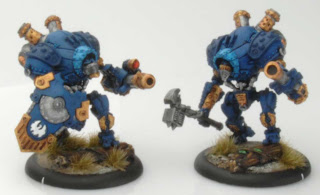 So with eleven "sleeps" till I need to be in Wellington, I have 10 figures still to paint.... confidence is not high I have to admit. The backup plan involves getting Harkevich and Black Ivan painted and using many of the same figures that I took to NiCon earlier this year. Either way I am sure it will be a fun tournament.
Posted by Wargamer on Tour at 5:54 PM No comments:

Minuteman 101 over at Lost Hemisphere

The release of Wrath sees the introduction of one of the coolest 'jacks in the Warmachine universe... The Minuteman. With my Kara Hunter list I am so keen to add a couple of these for some serious fun times with light 'jacks.
Spud over at Lost Hemisphere just completed an intensive 6 week boot camp with this new toy and has written a great article outlining his thoughts on it, and the synergies with various Casters. Now I just need to wait for this (potentially) great looking model to be released.
Stay Your Wrath
Posted by Wargamer on Tour at 10:59 AM No comments:

After much procrastinating, I finally managed to finish my Hungarian Assault Gun Company that I started almost a year ago in preparation for the NZ Late War GT﻿. Technically the army still needs a couple of things to be painted before it is truely finished (an Infantry Platoon, a PaK40 Platoon, a few more tanks and a single tank crewman for one of my L3's) but I am prepared to call it done for now!