FlamesCon is just around the corner, which is to say it is still a few months away but I need to nail down which army I am taking and then finish painting it. I have at least nailed the very first issue which was Flames Of War, or Team Yankee.

Right now, I have two competing options (plus a 3rd wild card) that I am debating
The Canadians:
Simple list, as many Leopard 1 tanks as I can fit in (given the points level), some infantry, recce and plenty of M150 TOW and ADATS. The Leopards can rush the enemy and either flank them or just try to overwhelm them, whilst the missile carriers do much of the heavy lifting as the Leopards 105mm gun is a little underwhelming.

I am keen to finish the army, but I have built it as a 100+ point force so cutting it down to 75 points hurts my soul.
The Czechs (East Germans):
Best way to beat MSU spam is to play it and see how it works? Also, I am thinking of using part of this force next year at Panzerschreck where Casey and I are going to team up again so painting this up kills (or wounds) two birds with one paint brush.

Plus, it is a pile of cool models... and I am being cunning and using my Syrian infantry that I carefully based up on a fairly brown/grassy basing style to be my generic Warsaw Pact infantry teams. So, painting these means I get to progress two projects at the same time. I know the figures are not quite right but they are close enough.
The French:
I've been chipping away at this project as a fun, spare time, when I want too project. Other than infantry and AMX-10RCs I have no idea what the force might look like other than having lots of wheels!

Where to from here????
Short answer, no idea! I will be getting the Canadians finished in the coming weeks (stay tuned for photos) now that I have some extra decals to complete them.

The Czechs have been progressing as a relaxing evening hobby project. It is too cold to paint out in the garage but assembling some tanks in front of the fire whilst watching some TV has been nice.

For now, lets assume the Czechs are option 1, whilst the Canadians are a fantastic back-up option when I inevitably run out of time.

Posted by Wargamer on Tour at 5:11 PM No comments:

Last week I took a look at the Israeli tanks and how I think they match up against their Syrian opponents. This week I thought I'd do the reverse. Quick disclaimer, I've been generous with what I consider a tank when it comes to the Syrians as they just don't have the variety as their opponents. 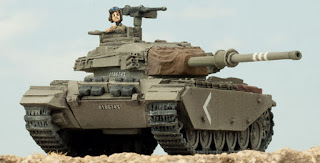 Just like last week I think we need a baseline and in this case it will be the good old Israeli Sho't (105mm) tank. Coming in at 9 points each the Sho't (105mm) is a solid mid-range tank. You can field a reasonable number in a 100 point game, along with some support elements. With fairly average movement numbers and a Cross of 2+, paired with an excellent long range (40"/100cm), high anti-tank (18) gun that is Accurate (ignores long range penalties to hit), counts as Brutal (great for killing soft targets), and can fire Smoke. Finish it off with sold crew stats (Courage 4+, Morale 3+, Remount 3+, Skill 3+, Assault 4+ and Counterattack 3+) and good all-round armour (Front 13, Side 6 and Top 2).

The other reason for picking the Sho't is that it is a common opponent for the Syrians in the Golan Heights.

T-54 vs Sho't
The T-54 is possibly one of the most ubiquitous tanks ever designed. If a conflict happened in the years following World War II, there is a pretty good chance the T-54 (or T-55) was there, somewhere.

First up, let's take a look at the crew. As expected this is one of the areas where the T-54 does not compare favourably with the Sho't. They are just as keen for the fight with good motivation (Courage 4+, Morale 3+ and Remount 4+) but are let down by their lower Skill (6) and Assault (5+). However, their Counterattack is pretty solid and comes in at 3+.

One area where the T-54 shines (perhaps being a little generous here) is the armour, having Front 13, Side 9 and Top 2. Next up is the 100mm gun that has good Anti-tank (16), Firepower (2+) and access to HEAT rounds (so no long-range penetration penalty). Unfortunately, it has Slow Firing and only Rate Of Fire (ROF) of 1. Moving and shooting is not one of this tanks strengths. Speaking of moving the T-54 is pretty average cross country, but pretty quick on roads (24"/60cm) and terrible moving through rough terrain thanks to a Cross of 4+.

In a stand-up shoot out with the Sho't, the T-54 tanks should lose every time as they have had a hard job hitting and a difficult job penetrating the Sho'ts front. Conversely (like all Syrian tanks) the T-54 is hit on a 3+, more than likely to be penetrated by the Sho't (105mm) and probably knocked out.

T-62 vs Sho't
The T-62 represents an evolutionary step in the design of the T-54 / T-55 tank, pairing a tried and true design with a larger 115mm gun. In Fate Of A Nation each T-62 comes in around 5 points, making it a fairly cheap upgrade option from the T-54.

The T-62 has the same movement, crew stats and armour as the T-54. This makes the tank a solid option, but certainly not star performer. Where that point cost really goes is the 115mm gun. And it is well worth that extra point!

The 115mm gun has AT 19, making it more than capable of penetrating the Sho't (with Front armour 13) even at long range. Like the T-54 it suffers from Slow Firing thanks to its cramped turret and a ROF of 1.  Coming back to a stand up fight, this one is going to be interesting folks as the two tanks (the Sho't and the T-62) look pretty even to me when you match 1 vs 2. I'd put my money on the Sho't at long range thanks to having 2 shots, a higher To Hit number and the Accurate rule, but if the T-62 tanks are allowed to close then that thin line of Israeli tanks will be under some pressure. 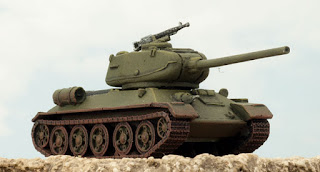 We are starting to work the lower end of the Syrian armour barrel already here. I won't go into too much depth about the stats of the T-34, but we can agree that it is worth it's 1.2 points per tank. It's armour is only 6 (making it about as good as an Isherman) and has a ROF 2, AT 12 gun.

This means it cannot touch any of the larger Israeli tanks, but is useful for hunting down light armour and support vehicles. Finally it is a threat to the Sho't (and Magach) if it can get around the flanks. Whilst I won't be painting any for my army, if I ever really wanted to drop in a company to act as armoured skirmishers I might borrow one from my Late War Flames Of War army. 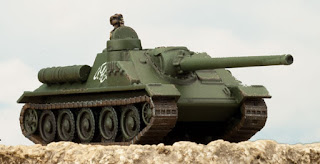 The SU-100 is another venerable ex-WWII design that is still serving a purpose (and it won't be the last) in the Syrian army. Like the T-34 these are not exactly top-shelf but do have a powerful 100mm gun that chalked up its share of Panther and Tiger kills on the Eastern Front.

It will have no problems knocking out light armour (like Isherman and AMX tanks) but at AT 15 will struggle to kill a Sho't (with armour 13). However, at least it does have a chance. At approximately 1.2 points per vehicle they do have a place in the force as some static 'covering fire' for your other tanks. 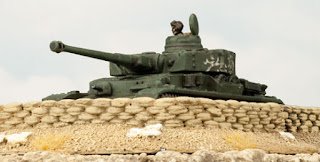 I've included this in the list because I think it is interesting, not because I think it is useful. The Syrians had a number of ex-WW2 German vehicles in their inventory. These were no-longer useful as tanks so found themselves turned into bunkers. Realistically they are not much of a threat, unless you choose to let them be a threat by forgetting about them. They are slightly harder to kill than a normal Panzer IV or StuG would be, however they are still easy pickings.

So... do I have a conclusion? It turns out that overnight I've found myself going from a big fan of the T-54 to thinking that I really don't have enough T-62 tanks. Five T-62 tanks are only 3 points more expensive than five T-54 tanks and they effectively have 2-3 points of extra AT. These couple of points will be the difference between penetrating a Sho't or Magach, or just being targets moving up.

Don't get me wrong, I think the T-54 still has as solid place in my army, especially if I don't want to play a strictly '73 game as the enemy has to treat it with respect so whilst they are shooting up my T-62s, the T-54s can be dashing across the table getting in close.

It is also important to remember that whilst the vehicles listed above represent the Syrian armour, you cannot forget the BMP-1 and Sagger teams. These are going to provide some really good tank killing ability for a lot less points than a platoon of tanks. The downside is that they are just a bit less mobile and (potentially) a lot more squishy!