Team Yankee has really captured my gaming imagination over the past couple of years and whilst I started with World War II and Napoleonics, the passion for WWIII has always lurked just under the surface (much like a Los Angeles submarine hunting its prey) waiting for a chance to burst out.

I have a few armies on the painting table and for the past few months I've been slowly putting together a plan to add a Czechoslovak force to that list. I cannot really explain why this particular force has captured my eye other than perhaps a strange liking of the Vz.61 Skorpion thanks to playing Twilight 2000 all those years ago?

The Czechoslovak People’s Army in Team Yankee is much like the other Warsaw Pact nations in that they have 2nd line tanks with the T-72M and T-55AM2, along with a few other (super cool looking) locally built vehicles like the DANA SP Artillery and OT-64 APC. They lack the really first line gear that the Soviets have but make up for by just being cool.

Other than gear, where the Czechoslovakians differ from their allies is their Courage and Skill ratings. They have a base Courage of 5+, whereas the East Germans have a 4+. This  represents a little less commitment to the cause than their allies and some long memories going back to 1968. They also have a slightly lower Counterattack (1 point less). This means that for a company of T-72Ms you are paying 1 point less at the bottom end with 3 for 6 points vs 7 points (for the East Germans) and 27 points for 10 tanks, vs 35 points.

When it comes to T-55AM2 Companies it is a similar story with 5 tanks costing 1 point less and 10 tanks being 3 points cheaper (at a total of 13 points).

My current plan is to finish building two T-55A2 Companies, each of 16 tanks. These would be supported with integral (min strength) infantry Companies in OT-64 armoured personnel carriers, small scout platoons with BRDM-2 and perhaps (depending on points) some AA in the form of some SA-9 Gaskins. Each of these companies come in at 28 points (or less depending on how I support the infantry).

They would form the aggressive core of the force, pushing forward to get up close with the enemy and hopefully causing some casualties to the enemy support elements or even their tanks if I can hit the flanks.

To give the Force a little more punch I'd add some T-72M tanks. Ten of these backed up with some infantry in BMP-2 APCs and BMP-1 Scouts are 35 points. In a 100 point game this doesn't leave me with much left over for support units, however I can either chose to play a bigger game, or drop a Tank Company (either the T-72Ms or T-55AM2s) or merge them by swapping the 3rd platoon in the T-55AM2 Companies with some T-72Ms. Assuming I get everything built and painted I'll have plenty of options to choose from!

To support the Force, I have a wealth of very nice options.

Hinds helicopters are problem solvers in my opinion. Their Spiral AT missiles are more than capable of knocking out enemy tanks whilst their save means they have a good chance of ignoring enemy ground fire.

Because they are airborne they can move around the table with far more freedom than my ground based anti-armour assets and unlike all other helicopters they can move and shoot their missiles.

Plus, they look cool, and there are specific Czechoslovakian Hind decals! 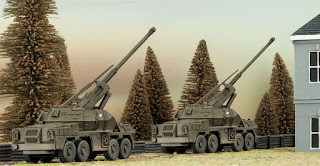 Next up are the DANA Self-propelled 152mm guns. As Leeloo said, "Big Badda Boom!"

These look phenomenal and pack some fairly serious firepower with AT 4 vs top armour and 2+ Firepower. They also have the Autoloader rule which means you reduce the score to hit teams under the template by 1.

Oh, and did I mention the words Smoke Bombardment? Just another tool in their arsenal. 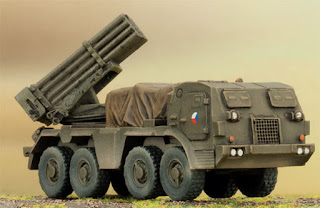 RM-70 Rocket Launchers are what you get when you take a Hail (or Grad) rocket system and put it on a much better-looking truck.

Thanks to their nice large Salvo template they should provide a useful option for taking on British Milan teams.

The addition of some Spandrels to the Force is a bit of a no-brainer to me as they come in at a very affordable 2 points for 3 vehicles and their AT 21 missiles are quite potent on the battlefield. Plus, they have wheels and in this force anything with wheels gets a look in.

Last, but certainly not least is the crowd favourite, the SU-25 Frogfoot.

Much like the Hind, they benefit from the ability to target models that think themselves safe hiding behind terrain. Their Kh-25 missiles are deadly with a capital D thanks to AT 27, Firepower 2+, and just to finish it off, Brutal, Guided and HEAT.

They will find you, and they will kill you. Of course, they only turn up half the time so a bad series of dice rolls could result in 21 points and 6 Frogfoots never turning up... so don't roll badly!

With so many projects that I want to work on I had better start planning my Christmas holidays!