Adventure on the High Seas

Tonight Sean, Victor and myself had our first game of Dystopian Wars. We had only given the rules a skim read to try and get the basics down, but it was a pile of fun. Definitely need to sit down and give the rules a proper read through... and paint our ships. On the positive side I am definitely enthused to finish the painting, and make a few islands for terrain. I already have some GF9 Rocky Hills which will be easy to turn into small islands.

Great weekend down in Palmerston North with the 10th annual Panzerschrek tournament. I'll have a full report later in the week, along with some photos (hopefully). But for now here is the most important photo  ;)

Safely arrived in Palmerston North at Casa del Allen. Army not finished... Still have a staff team, command stand and the bofors crew left to do... Bit disappointed but ready for some interesting games over the weekend. Will have photos from the weekend and of the army next week with a bit of luck.
Posted by Wargamer on Tour at 9:44 PM No comments:

This weekend a few of us are heading down to Palmerston North for the 10th Panzerschreck event. This year it is a doubles Flames of War tourney so Surf (Mike) and I are pairing up. Rough list is 3 King Tigers and 10 Zrinyi assault guns plus some supporting bits. Needless to say pretty much need to get all the supporting bits painted. ;D. Still to finish:
Artillery staff team
Artillery howiters
Bofors AA battery and command team

So (on my previous tourney track record) basically nothing!

I'll get my act together before Friday to take some photos.
Posted by Wargamer on Tour at 11:03 PM No comments:

Victor and I had a quick 40 point game tonight, largely so he could play around with some different combinations and so that I could have my first run with my Kara / Hunter list.

It was a great game, our dice were particularly bad resulting in a fair amount of laughs. Its amazing how many dice throws you can fail on 6's!

I sent the Hunters up the left flank to take on the Thor (and the Bunnies), Dannon and Bull. My heavies propped up the centre, whilst the Rangers hid in a forrest to lay down supporting fire. Popped my feat early and put a dent in the left flank, but failed a "use brain" test resulting in the feat turn not being as sucessful as hoped. The Nomands came straight up the middle with Alexia, Rutger, Taryn and the Vanguard moving against the Hunters. My Triumph held up the Nomands for a turn, bit of support fire from the Hunters and Kara knocked down one Nomand, but the survivor took out my Defender. At this point Victor pushed forward to get a result one way or another and found a couple of bullets from Kara (as well as a hit from a Hunter) resulting in a quick finish as McBain strayed a little too close.

Learnings:
Hunters are awesome, but need to keep moving because as soon as anyone gets their hands on them, they are dead...
Rangers only have a 10 "range... not 12  :)
Triumph really is a bit toss.... luckily I love the model!
Kara is awesome, but once the enemy hits your lines the game can go badly... quickly.

Definitely need to look at getting Captain Jeremiah Kraye painted in time for the event so that I can run two casters at the tourney just to give myself some flexibility.... or course that still sounds like taking the whole thing a little too seriously!
Posted by Wargamer on Tour at 9:31 PM No comments:

Kara Sloan and her Hunters II

I actually managed to sit down over the weekend and get some painting done, luckily I had a backlog of podcasts to work through so the two things went hand in hand nicely.

Have not managed to get any of the first five jacks finished, although one Hunter (see below) is dangerously close. Not happy with where the Defender and Triumph are, they are just too blue. On the three Hunters I quite like the ratio, but I need to go back to the drawing board with the heavies. Victor made the suggestion at work that I just needed more metalics and annoyingly he may be right - I say annoyingly as it will require a heck of alot more painting  :(

Wednesday night I have arranged a 40 point playtest though, so I am excited to get some practice games in before CTA in a month and a bit, hopefully it will pay off. 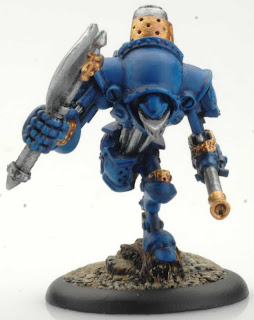 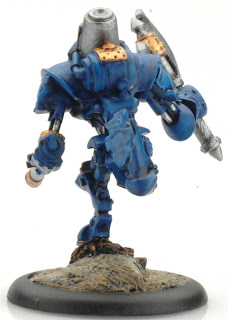 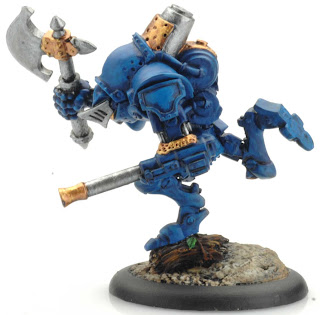 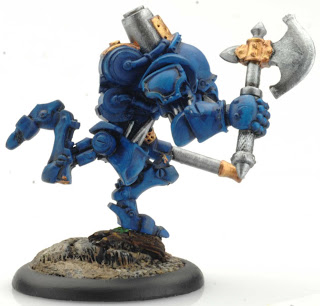 The base is a resin cast from Back 2 Base-ix. I really like how it has come out so I am tempted to go nuts and replace the majority of my bases with theirs.... just not sure I can handle rebasing that many things.
Posted by Wargamer on Tour at 9:27 PM 1 comment:

Okay, so the CTA players pack is now up on the ThrallBlacks blog, short version... I'm gonna get pwned  :)

Two games at 30 points:
Above, plus Defender - 9 points

Three games at 40 points:
Above, plus the much maligned Triumph - 11 points

Now I could take two lists, but that would; A, suggest that I was taking it waaaay too seriously, and B, result in me having to paint two casters.... not to mention work out how two lists work instead of not knowing how one works  :D

On the postive side, 7 rounds against what sounds like a good bunch of gamers, and the chance to spectate the final play-off between 1st and 2nd. Add in the chance to catch up with some of the Wellingtonians, a visit to Uncle Changs for dinner on the Saturday night... could the weekend get any better!

Although I think I had better get painting so I can organise a couple of practice games against the locals (more on the painting front tomorrow once I have a few pictures of a WIP Hunter).

Posted by Wargamer on Tour at 9:52 PM No comments:

Over the last few weeks I have been slowly (very slowly in fact) working on a Sherman company for Flames of War. Getting them assembled was easy, getting them undercoated was very easy (thanks to a can of Warpaint US Armour spraypaint), getting the base colour and magic wash just as easy.... so why are they not finished I hear you ask.... tracks... my old foe!
Having painted alot of 28mm stuff recently I had forgotten how much detail is on a Flames of War tank and that you have to put the effort in if you want it to look good. So today I have some work in progress photos of the force (missing a few bits), my challenge is to try to have them finished by the end of the month though!