Long Weekends are for Hobby Time?

This past weekend was a long one thanks to Auckland Anniversary Day. Being the eternal optimist that I am I was hoping that I would get a few things done

And in typical Chris style, I achieved about half of it seeing The Hobbit (which was good - no Two Towers but a good way to start the trilogy) and Skyfall (I like the Bond reboot, but I miss some of Bond's cool gadgets with the exception of the "invisible car from Die Another Day which I truly hate to this day!). Obviously I managed to spend a great amount of quality time with my son, who pretty much single-handed stopped me achieving any painting this weekend - I think I can put that down to a combination of teeth starting to make an appearance and me looking for other things to do rather than painting. However I did manage to get my back yard sorted out with a pile of soil moved, grass seed sprinkled and watered. I considered this a major achievement as I do hate gardening.

However it does mean I am in bad shape for Ides of March coming up in about 6 weeks. I have decided to take a list of things that I want to paint rather than things that will work on the tabletop as a way to get me to paint these units.

My theory is that Irusk giving Tough out to the infantry and allowing them to walk through each other will make a fairly un-maneuverable force a little more spring. We are also playing Deathclock so not having to move or shoot a heap of figures should make life a little easier. In the one test game I have played I did learn how squishy Irusk is though and need to keep in mind that his job is to lurk well back and let me spam AOEs from the Destroyer and Bombardiers. Now should I fail to get all these bits painted I might need to come up with a fallback list, but that can wait a few weeks. Ideally though I will get the Man-O-Wars done as that will just make me feel good to have them knocked off, leaving me with a couple of units of IFP and a Winter Guard "Deathstar" as my big units of figures to paint.

Of course I do have 21 T-34s and an extra 21 turrets to paint next month so perhaps I should start thinking of my contingency plans sooner rather than later!
Posted by Wargamer on Tour at 10:32 PM No comments:

Over the Christmas break I managed to be about as even lazy on the brushes as I get, so a few days before I was meant to head back to work I pulled out my Dystopian Wars ships that have been sitting in a part painted state for the last couple of months and hit them hard. I managed to:
I may need to take a little break from the rest of my ships though as I have to get a couple of armies (one FOW and one Warmachine) painted for some hard deadlines. On the positive side the remaining ships are primarily the ones that I will really enjoy painting (i.e. big ships/airships with really big guns!). I've also ordered the new Danish and Scandinavian ships to add to the fleet. I am current trying to work out a paint scheme for them that will still look Prussian, but have a little local flavour. My current thoughts are to swap the hull colours for the Danish ships, replacing the grey with black, and the black on the dazzle stripes with red. The Scandinavians will get some green added to them (probably replacing the yellow trim on the airship tails). I would like to add some of the green to the Metzger Class Robots to help tie them in as well.

In the meantime, here are some images of the latest ships to come out of drydock.

Vader vs the Salami Dumptruck!

This weekend I headed out to my X-Wing gaming venue of choice, TCOW. Dan and I had arrange for a re-match where I would take Vader and some friends up against Horton and Salami Dumptruck!

I had also downloaded a cool app for my phone that lets you build battle reports from still images so I thought it might be a chance to give that a go as well. The results of both (the game and the app) were pretty good, and I definitely learnt some lessons... the main one being to use a decent camera (rather than the one in my phone - sorry for the blurry shots!) and that if Vader is going to get locked up by three Y-Wings with Photon Torpedoes it pays not to run in to things and lose your actions!

It was a great game, although I think I should start thinking about Rebel builds as I cannot seem to stop my ships from running into each other, so running less ships has to work in my favour! 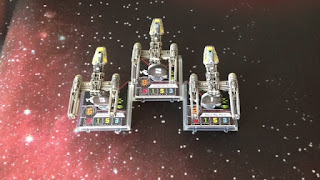 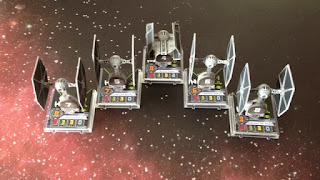 I meant to be put this up a week ago but with a busy first Christmas with my son the holiday period disappeared quite quickly on me. So, on with the show!

2013 is going to be a bit of an odd hobby year for me. We are only holding one GT this year, so it means a little less incentive to work on some of my FOW projects (EW French, EW Soviets or anything Mid War). I am also unsure as to how many “away” games I will get in as it may be hard to get leave passes for the long weekends, although I am in preliminary discussions to head to Napier in June (good wine country down there so I can get in some gaming, and then after that we can visit some wineries!) and Wellington in August (nicest bunch of WarmaHordes players in New Zealand – sorry fellow Aucklanders, you guys are great too but they take the title). Evan is also likely to suggest I make the trip to Panzerschreck for his doubles tournament in July.

What’s the plan?
Q1 – I need to get a 42 point force painted for Ides of March and I have about 7-8 weeks to do it. I have been tossing up between expanding my Kara Sloan list by painting my Minutemen and Gun Mages, or starting my Trolls… Last night I was playing around with War Room and got excited about an eIrusk, 2 Juggernaught, 5 Man-o-War Shocktroopers, Bombardiers and Demo Corps and a small unit of Mechanics with their Officer UA. I love the MoW units (although they seem a little underwhelming on the table) and this would get me to paint them!

I also need to paint up a T-34 Battalion for a web article I am going to be working on. It means assembling and painting up 21 tanks, as well as an additional 21 turrets. Not normally a big issue but it does mean that I need to schedule my painting time well to achieve both sets of goals.

Q2 – If I am heading to NiCon it will either be WarmaHordes teams event (with Sean and Victor) or Flames Of War at a guess. In which case I will need to paint up some Trollbloods or find something that is going to inspire me with regards to Late War (not sure what periods will be on offer, but LW is a safe bet at this stage) – good chance to paint some of the new plastic PaK40s for my Hungarians as well as some Tigers I have had stashed for a rainy day!

Q3 – Call To Arms in will definitely be a WarmaHordes weekend with either the Trolls or Kara (or whatever else I end up coming up in between). Looking at my unpainted WarmaHordes figures there are quite a few units that I want to get painted and I know that a tournament is the only way to help me achieve that goal, hence all the swapping between forces.

Q4 – Finish my 1956 Israeli Tank Company! I have the tanks done, now I need to finish my artillery, add some recon and infantry. All the figures are sitting in a box at home, they just need a little paint and a lot of time. Evan is also working on a little Christmas present for me to go with this army – more details on that later.

Throughout the entire year… play some more games in general. Other than getting out to play X-Wing at TCOW in the last part of 2012 I did not play may games so the onus is on me to get the FOW and W/H stuff out of the cupboards a little more regularly. I’m also going to get my Dystopian Wars Prussians (and Allied nations) finished this year. They are quick and fun to paint so I need to stop mucking around and just get them done! I’ll also be getting my Relic Knights pre-order at some point so I should try and get some of that painted (or maybe just assembled). Last (but not least) is to work on some 1967 / 73 Syrians to go up against my Israelis.

Well, that is the 2013 plan, I already have this sinking feeling that I have bitten off more than I can chew!

Between writing this and posting it, I managed to get in two games (WarmaHordes with Tony and Napoleon at War with Wayne) and paint some Dystopian Wars stuff – the year is actually starting off according to plan!
Posted by Wargamer on Tour at 9:16 AM No comments: