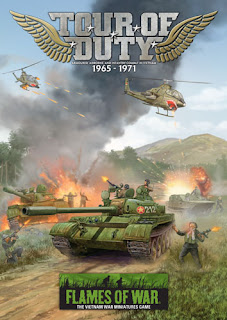 Over the past few years Battlefront has conducted three tours of Vietnam, each time getting a little deeper into the jungles so to speak and covering more and more of this conflict. Like the other guys in the office I was quite excited but as with any project I had to temper my enthusiasm with the cold hard reality that it was difficult to fit it into my painting schedule.

Like most people I also wanted to make sure it was not a one off project before diving in. The second tour (Tropic Lightning) introduced US tanks and infantry to the game, rekindling my enthusiasm (of course mine ended up painted in desert colours for 1967/1973 Arab-Israeli wars) and I even picked up a couple of choppers.

Once again though, timings and other projects took priority and they remained unpainted. When work started on Tour Of Duty I decided that I would try to move my painting schedules around to fit something in, if for no other reason than it would be a nice change of pace. 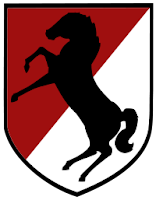 I decided to keep heading down the path of the Air Cav (something about all of those helicopters I guess), but instead of painting them as the 1st Cavalry Division (Airmobile) I picked the Air Troop of the 11th Armored Cavalry Regiment – the Blackhorse Cav. The reasons for this were simple, I could paint up lots of choppers, I could paint up a supporting ACAV platoon with M113s and Sheridans, and finally the Blackhorse Cav were on the front lines in the 1980s holding the Fulda Gap. If something had happened during the days of Reagan, Thatcher, Brezhnev, Andropov and Chernenko these guys would have been up to their ears in Soviets, and as it happened fighting out these theoretical battles was how I cut my teeth with wargaming (along with Napoleonics and WW2).

In terms of what I wanted to paint I kept it simple going for a little bit of everything, that way I can field whatever I feel like within reason. So on the painting table is: 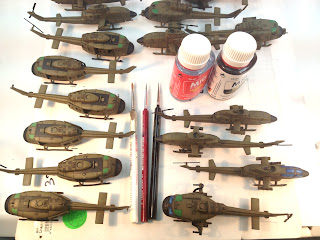 I am also using theses models as a test for some new techniques. A couple of months ago Evan was up in Auckland and showed me a few tricks using my airbrush, and the MiG range of oils and filters. I am definitely a novice with them but am pretty happy with how they are working so far.

Next week I’ll have some better WIP photos of the choppers. I don’t think I’ll finish them in time before I have to switch to painting some Warmachine figures for a coming tournament but I expect to get them dangerously close to being finished.
Posted by Wargamer on Tour at 1:12 PM 1 comment:

Over the weekend we rounded up a few people to spend the day playing games all in the aid of charity. It's a hard life.....! Wayne and Mike organised a large "Return to Budapest" game with 4 generals per side and 1000 points each. I thought this could be a good chance to roll out my T-34s that I had just finished painting.

I also dug out some old LOTR Rohan figures that I picked up for a long forgotten project and turned them in to a force for Saga (I am calling them the Ro-Normans or Ro-Bretons) for an intro game with Wayne. Finally I managed to play a couple of games with Warma-Hordes verses Casey and long time Warhammer opponent Reid.

It was great to spend a day gaming, but even more importantly it was nice to help the WWPD guys raise some money for a very worthy charity.

Posted by Wargamer on Tour at 10:59 PM No comments: