Alrighty, so technically a bunch of islands are not really "Prussian" but I finished them off so that I could use them with my Prussian fleet for Dystopian Wars...

Enjoy these images of a Prussian Fleet sailing amongst them. 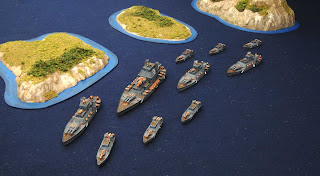 Had a great day of Sunday Gaming today and despite turning up late (as usual) Victor and I managed to get a game of Dystopian Wars in, before settling down for a good game of Battlestar Galactica with Sean and Casey.

Dystopian Wars was Victors Empire of the Blazing Sun up against my Prussians. It was really a chance to see how much of the new ruleset I managed to absorb after last nights read. In terms of the update to V1.1 I really like alot of what they have done. It feels like there is alot of streamlining, but I need many more games to really get my head around the changes. I also wish I had a quick reference sheet with the model assigned rules (MARS) to help me remember what everything is. I also need to look at sorting out some tokens as we had a lot of damaged ships limping around the table. We kept the game simple and avoided anything flying, as well as too many of the optional (or what we refered to as optional) rules like morale...

As it stood my little ships accounted for themselves well cleaning out alot of Victors destroyer screen, but his cruisers then took their toll on the survivors and my battleship. Meanwhile my gunships (think guns of a battleship but speed of a cruiser) worked over his battleship with a little help. In the end we called it a draw. I think I may need to re-read the rules again and perhaps cruise the Spartan Games forum for a few extra gaming aids / FAQs etc - either way a great game and a good test drive for my new islands (I'll have more photos of them soon). Hopefully this week my last two will arrive allowing me to create an island airfield an a table-corner industrial facility for some home-brewed scenarios.

Next up was BSG - the Fantasy Flight board game. If you like BSG at all, and you like board games at all, then this is a absolute MUST purchase. I've played it a dozen times now and each time is different, nail biting, back stabbing, high quality fun... and we haven't even had a single game yet using the expansions (but now Sean is hooked he will read the expansion rules and teach the rest of us!).

As they say on the site
The Board Game is an exciting game of mistrust, intrigue, and the struggle for survival which places each player in the role of one of ten of their favorite characters from the show. Each playable character has their own abilities and weaknesses, and all must work together in order for humanity to have any hope of survival. However, one or more players in every game is secretly a Cylon, and wants the humans to perish.


The basic premise is that anyone can be a Cylon, it is just luck. As a group you try to get your doomed fleet home whilst the Cylons (who many not even know they are one yet) try to stop you.

Short version of the game, I was everyones favourite (Baltar) and knew that I was a skin-job from the start. I spent the first half of the game hiding, counciling the other players, trying to hide my identity. Mike was playing a confusing game and even though I knew he was a human he had the rest thinking he was a toaster at heart. I changed sides with a bang and proceeded to cause trouble whilst I waited for an ally. In the end it was Casey (Adama) who revealed himself, more through accident than anything else though. In the end the Cylons plucked victory from defeat as the humans were moments away from salvation (not may humans admittedly, more than a few perished after a massive Cylon ambush).

Assuming I make it to the next Sunday Gaming session I very much hope that we roll out another game of BSG!
Posted by Wargamer on Tour at 9:54 PM 1 comment:

With so many open projects, either barely started or almost complete I thought it might be fun to focus on two for the month and try to finish one, my Prussian Fleet for Dystopian Wars as well as getting a new one underway, my Prussian Army for Napoleon at War.

Dystopian Wars 101
DW is a Victorian era steampunk game (specifically in 1870) by Spartan Games. In their timeline the Industrial Revolution happened decades before our own so there is a wide variety of very advanced technologies as well as a lot of recognisable ones. There are two major aspects to the game in so far as you can play a land based or sea based game (or a combination of the two). We chose to get in to the sea game, largely because if we wanted to push tanks around we have Flames Of War...

The game mechanics are pretty straight forward and quite fun. Basically you need a good number of D6, 6's are good and let you roll more dice. Don't let this comment fool you, it is not just a dice game as careful use of your resources are required - you don't waste a Battleship hunting down Destroyers. The rules also received a tidy up recently and so 1.1 of the Master Rulebook is now available, there is also an expansion coming out right about now.

Victor, Sean, Mike and I each bought a starter fleet, I of course found myself enticed by a number of extra models that were released early for the Prussian Fleet. The models are wonderful... they have been digitally designed and then rapid prototyped. This has left horizontal lines that are quite faint on the ships from the printing process. I choose to see those as just another part of the model rather than going insane trying to clean them off. Plus once the models are painted and on the table you will not notice them. For once I managed to get a bit of a headstart on the rest of the guys and got some ships finished off, however this lead me to being rather over confident and more ships were purchased. Now I find myself with a fairly large Prussian Fleet (as well as some great islands and buildings) that now need painting - hopefully over the course of this month...

Napoleon at War 101
Napoleon at War is basically what it says on the book - a Napoleonic Game (think early 1800s and lots of guys with muskets and colourful uniforms, by a Spanish company called Man at War. I've read through the rules once and will be having a game against Wayne and Mike in the next couple of weeks. Based on that one read through I am very excited, so much so I went out and bought and entire 15/18mm Prussian army from AB Figures from Nic over at Eureka.

The rules are very Flames Of War-esque in that they are fun, don't spend too much time dealing with the minutia and look as though they will produce a fun result in a couple of hours. All of which are big wins as far as I am concerned. Each foot unit has 6 bases with 4 figures, the bases are about the same size as a FOW small base. Cavalry and guns each go on larger bases, and in the case of cav are 3 to a base. They even follow their own version of 3+/4+/5+ for motivation and and skill - called valeur and discipline.

They are let down a little by the fact that the Spanish to English translation can be a little tough to follow at times, but you take the good, you take the bad and there you have, a Napoleonic set of rules that looks fun...

In terms of the number of figures you need to paint it is the same as pretty much any Nappies set of rules. My estimate is approx 250-300 infantry and 50 cav, plus some guns. Basically a similar number of figures to a Soviet army for FOW, but with much more interesting uniforms.

I have sucessfully painted up one (yes that is right... one!) test figure to get my colours sorted out. The version pictured below is not quite right - I have since changed the jacket colour to be a much darker blue and painted the mess tin on his back silver (thanks Wayne!). It looks a little rough in the photo but for a 15/18mm figure I am exceptionally happy with how it turned out. Now I just need to paint 23 more to have my first unit done!

Zee Plan!
So, what is the plan for Prussian Month. Not entirely sure if I am being perfectly honest... but I am going to set myself a "reach goal" whereby I set an impossibly hard target and when I fall short I will have hopefully achieved more than if I set myself an easy one.

Dystopian Wars: Finish everything that is in the photo (above) plus another 3 ships not pictured, and finish off all of the islands I have (which I also need to find as I am not sure where I put them after my last tidy up). I will not worry about painting the buildings as I have a plan for them which requires me to buy two more islands.

Napoleon at War: Paint one entire Infantry Regiment. That is 3x 24 figures (two Muskeeter Batalions and 1 Fusilier Batalion), plus another 3x 4 figures (for the skirmishers).

Sounds hard.... maybe I should go and start work on them rather than playing World of Tanks... I'll update my progress next week.

Posted by Wargamer on Tour at 10:01 AM No comments: