Spent a little time over the weekend putting together a test stand for my EW French Infantry list. The plan is to take it along to Battlecry early next year so I need to get it knocked our pretty quickly. I'm very happy with how 95% of the model turned out, I just need to re-do the faces as I took a few too many shortcuts. Basically used the new German Armour (desert) spray can, painted the bags, helmet, weapons, webbing etc as per Blitzkriegs paint guide, then a predominantly brown magic wash, quick highlight and done!

Also managed to mix up a flock combination that I am happy with (2x GF9 Winter/Dead Static grass, 1x Spring Undergrowth, 1x Meadow Blend) so I now need to mix up a whole tub of it! 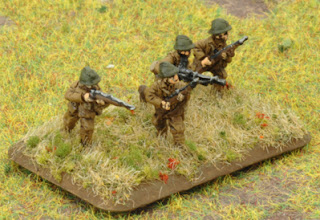 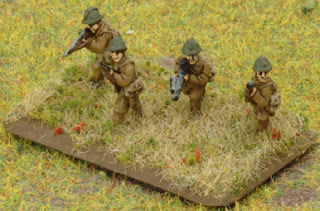 Posted by Wargamer on Tour at 1:17 PM No comments:

Earlier in the year Victor needed some white-washed tanks for the Kampfgruppe Bäke section of Grey Wolf but unfortunately we did not have anything suitable already painted. Luckily Victor is very good at taking photos and managed to make my old KG Bäke army look pretty damn nice (if I do say so myself). 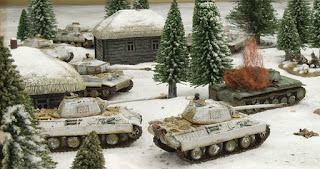 There are more photos of the force, plus a tournament report from when the army went to Panzerschrek in 2009 (that weekend was so cold it made me feel right at home with an army of white washed tanks!) on the Flames of War website.
Posted by Wargamer on Tour at 12:22 PM No comments:

With Christmas just around the corner a wargamer turns to such thoughts as.... so what projects will I start over this holiday and not get finished! At least I do anyway. Its been a long year and I am really looking forward to Christmas as an opportunity to (hopefully) finish off some projects that have been sitting in my WIP list for way too long and with three weeks off this could be my chance.

Top of the list has to be my Dystopian Wars Prussian fleet. I made such great progress on them earlier in the year (and they are easy to paint), but they have been a challenge to find the enthusiasm to kick start again. Worst of all Spartan Games keep putting out more great looking ships (oh the hardship).

Next is my French EW Compagnie de Chasseurs Portes. These are Confident Trained guys running round in armoured halftracks and they look super cool. I've got a pile of Evan's new sculpts (which are perfect for these guys as they don't have the greatcoats) and I am working on a test stand now. Of course I have to have the army finished for Battlecry in February 2012.

I've signed up to do an article for the website looking at how to enhance the new range of Desert Buildings, so now that its in print I guess I had better make sure I get that done over the break. Mike put together an awesome article for WI about the tweaks you can make to really make the Desert Terrain range pop, so I plan on stealing a few of his ideas. As a bonus the terrain will work well for Force on Force too!

Speaking of Force on Force... I'd really like to finish my US Marines. Now that I have a paint scheme I am happy with, and know I can knock them out really quickly I would like to put a tick in that box.

Next up... eBaldur for Warmachine. Sean, Victor and I have to defend out Warmachine Teams Tournament record (last.... but we did it in the nicest possible way) and we are all bringing along Hordes forces this year. There is a great article about converting Megalith (eBaldur's best friend) and making him look a little more natural so I am guessing I'll need to take a look at that. I'll be using Equinox in mid March as my test event prior to the teams tourney.

Last project on the list is to finish assembling and painting some Perry Miniatures American Civil War buildings. These look great (although can be a little fiddly to put together) and will do nicely for some Wild West action next year. I've got plenty of barrels and fences as well so we should be able to have a good gun fight or two, with plenty of obstacles to hide behind.

Phew.... that's a lot of stuff! And of course somewhere in there I need to fit in all the chores around the house that my wife will be expecting. Thank goodness I managed to resist purchasing The Old Republic or I would have never gotten anything done.

And on the lighter side, looks like Sean has been up to his old tricks again... 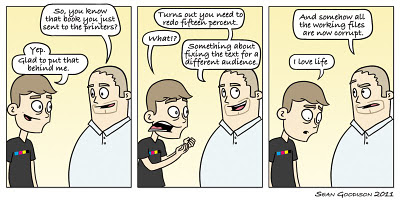 Posted by Wargamer on Tour at 8:55 AM No comments:

On Sunday I got together with some friends and had a quiet afternoon of gaming. It was nice to get out of the house for a little while in the weekend and have some "bonus" gaming. Managed to fit in two games before I got a call from my wife telling me that power to our house had been lose and that power lines were down (Sunday afternoon callout.... so much for this months gaming budget!).

Anyway.... had a quick intro game of Legends of the Old West (LotOW) with Victor, more to give him a basic idea of the rules rather than anything else. This game ROCKS! and despite having not played it in a few years, I remembered some of the rules - thats a good sign in my opinion that the rules are fun. Victor's band of four guns managed to run me out of town (beginners luck). I would have taken some pictures but we were using 15mm European Buildings as stand-ins whilst I build me Perry's plastic buildings.

We then switched over for a 25 point Warmachine game. Victor put his Skorne on hold and pulled out his Dwarves: Gorton, Steinhammer, 4 Gun Bunnies (2 marshalled by Thor), a Driller and Brun and Lug. I put the Butcher on the table for the first time (he is pretty awesome), two Juggers, 5 Demo Korps, 2 Manhunters and Widowmakers. The game was heaps of fun with Victor putting me under early pressure cleaning out alot of my figures for just the loss of Steinhammer, but on the feat turn I was able to put down the Driller, Brun & Lug and a Gun Bunny (with 1 and bit Juggers and Butcher), essentially leaving Gorton with no choice but to go in and try and finish off the two damaged Juggers.... it did not end well for him!

Sadly the efforts on Sunday have now given me another Christmas project to do - put together my Wild West houses and put together a small town for some gaming fun!

P.S. - Congrats to Dave Taylor for adding another future gamer to this world!
Posted by Wargamer on Tour at 8:36 AM No comments:

I've been a bit quiet this last month or so... I think it is due to a little bit of burnout and having a pile of work on my plate.

But I did manage to get an almost solid 24 hours of painting in over FlamesCon a couple of weeks ago and it was a blast. I attempted to paint up a Raiding Aces force for our upcoming Studio games - not wanting to spoil it but I did not quite make it, although I definitely had a blast!

For more check out the post match comments on the Flames of War site or Episode 19 of Radio Free Battlefront (which is all about FlamesCon 2011).

I also managed to finally beat Victor's Skorne list (with Zaal ad his Ancestral Guardians)... its been an unstopable juggernaught over the past few weeks but Sorscha and her Death Star of Winter Guard (and Kovnik Joe) were up to the task.