Its been a little quite round here over the past few weeks, coming off some serious painting time for the NZ Nationals. Unfortunately that just results in more pressure for the next two tournaments (my final two before taking a 5 month break). I have a Mid War Soviet Tankovy list that I am working on for the Mid War GT that I'll have pictures of in the coming weeks, but I am also working on my eBaldur list for the Teams Tournament in about 4 or 5 weeks. I've come up with a style that I am happy with for the wood and stone, that is quick and fairly effective, the next challenge is to try and complete 4 Wolds over the course of the next 5 nights... Technically I think I can do it, but to help make sure of it lets call this a Wold WIP Week Challenge!

Tonights job - finish the Woldwatcher that I used as a painting test (now that I look at it, some of the painting looks a bit dodgy at 200-300% of its real size...) 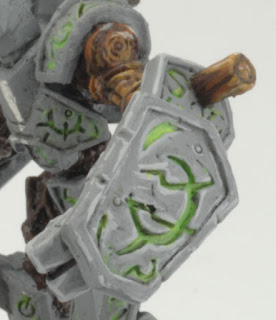 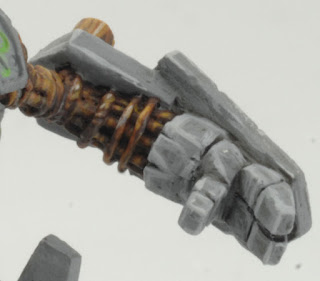 Posted by Wargamer on Tour at 8:52 AM No comments:

Over the past weekend we had the New Zealand National Wargaming Convention in sunny Hamilton (and for once I am not being facetious about the sunny part). I had an absolute blast and played about 12 games, many of which were real nail biters. Whilst there was way too much fun to remember everything I actually felt like some of the games were close (i.e. a couple of different dice rolls would have resulted in a reversal), some were completely at the other end of the spectrum, but overall I look back and think that if I made a couple of better decisions I would have done a little better.

Couple of highlights:
eMorghoul running into Karchev and a Juggernaut and hitting Flashing Blade a bunch of times. With 19 and 20 armour respectively you would expect that both Karchev and his friend would get equally damaged... no... the Juggernaut took a total of 2 points whilst the big man himself took around 20 (bear in mind he was not boosting ANY of the damage rolls).

A lone Man O War Demo Corp surviving attacks from a Shredder, Harrier and a ranged attack from an Angelius to contest a scoring zone and give me a scenario win. I actually asked my opponent why he was tying to kill the DC figure as I could not understand his strategy - once he explained it to me I almost apoligised for winning as I never saw his plan coming and if it was not for a string of bad dice he would have probably won.

Couple of lowlights:
Wading through a pile of Fennblades and Warriors to get my hands on eMadrak, only to fall 4 points short of killing him - thats after knocking off a couple of free transfers to nearby warrior models and a pile of transfers to beasts. Given that I was about to lose on the scenario it was my only play but still... sooooo close!

Forgetting to pop Sorsha's feat in my last game.... this was a real lowlight for me. Up against Xerxis and his Cataphract friends I felt like it was going to be a hard matchup for me - then I forgot to pop the feat in turn two and it went from being a bad match up to one where I had no chance. This was one of the few games I have ever played where I was seriously annoyed at myself.

Bottom line:
Did not come last in either of the events, won more games than any previous tournament... thats a great result as far as I am concerned. Had some great games, caught up with some good people and painted some more figures. Speaking of which, here they are! 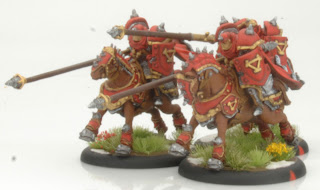 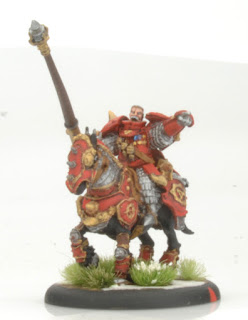 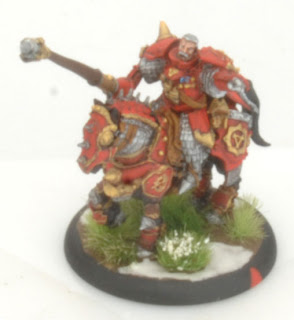 Posted by Wargamer on Tour at 9:34 PM No comments:

This coming weekend is the New Zealand National Convention and there will be around 150 people from all over the country coming together for a weekend of gaming, covering everything from Ancients to Napoleonics to Flames of War, Warhammer and Warmachine. Its definitely one of the highlights of the gaming year as you get to catch up with people you have not seen since the last Nationals.

As I mentioned in the last post I am taking Karchev out for a spin, but I realised that my list was not entirely legal for the Highlander event so I have had to make a few amendments. It now looks a little more like this:

Karchev the Terrible
Wardog
Destroyer
Juggernaut
Iron Fang Uhlans (x3)
Kovnik Markov
Not entirely sure that the Wardog is legit but I will worry about that on the day. On Sunday I took the force out for a run against Victor's Skorne list - an Immortals/Zaal force that I have real problems knocking over. This game looked like no exception as I pushed forward across a broad front, he did the same, my Cav charged in a killed a few of the Immortals and then were swamped and killed (along with my Juggernaut). Luckily the dice were on my side as Karchev popped his feat, 'towed' the Destroyer up field and in the process killed one his Cyclops, then the Destroyer charged into Zaal and despite having a couple of transfers managed to put him down.
What did I learn... Tow is awesome (but I knew that already), Cavalry hit hard but don't really like being hit back and that Karchev is still the man! Of course this may be my last win with the list based on previous tournament performance  :D
As for painting the Cav, I've finished the horses and are now working on the riders with two nights to go. Should not be a problem as long as no-one looks too closely at them.
Either way it will be a fun weekend especially since I will have added another finished unit to my Khador army.
Posted by Wargamer on Tour at 9:09 AM No comments: