It has been a little quiet on the gaming front for the past couple of months since my son joined the family. It has been way too easy to just go home, watch TV and hang out with him! As luck would have it though it seems that my hobby mojo is coming back thanks (as usual) to the announcement of a couple of new tournaments, plus getting out to a few gaming days or events over the past couple of weeks!

Next up: FlamesCon 2013 – Late War GT
In 1956 the President of Egypt, Gamal Abdel Nasser announced that he would nationalize the Suez Canal. The threat of access being restricted or lost caused France and Britain to travel down the path to war with Egypt, with Israel acting as the third member of the alliance. 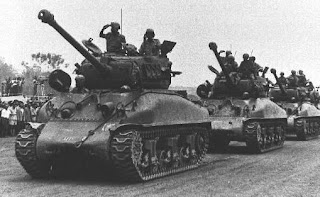 Operation Kadesh (ironically launched 56 years and 1 day ago - Oct 29) was the Israeli plan to invade the Sinai Peninsula and involved a parachute drop to capture the vital Mitla Pass, as well as the capture of the city of Rafah and Gaza Strip.

For the better part of a year I have had figures lurking in a box in preparation for a 1956 Israeli Tank Company using Blood, Guts and Glory as my template list (at least until I get around to making up a “proper” list). The Israeli army in the post war error was a jumble of equipment purchased (and I use that term in its widest possible context) from a variety of sources.
My list is going to comprise of the following (all Confident Veteran):
Company HQ
2 M4A1 76mm Shermans
1 M32 TRV

The list is a bit of a compromise between what I can reliably expect to paint over the next couple of weeks, what was (more or less) in service together, and the lists as they stand in BGG. From my reading I should have chosen to use the Confident Trained list from BGG but there was no way that I was going to get it all painted in time as I would have added a platoon of infantry (using a mix of figures from the British Commonwealth Infantry blister) and some recon. 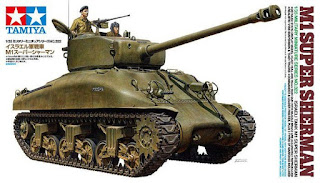 The biggest issue is going to be getting the tank markings sorted out. During the ’56 the Israeli’s had issues with tank recognition as both sides were using much of the same equipment (especially Sherman tanks) and after the war adopted a secretive (but very large and obvious) tank marking system. But during this war the tanks had a small ID number painted on the hull in white, a blue and white stripe on the turret roof, and/or a blue and white cross on the engine deck of spare wheel. The stripes or crosses I am going to have to hand paint, although I might try an experiment using Tamiya masking tape to get nice clean lines. I am not sure about the ID numbers – as far as I can tell no-one makes those decals in 15mm and they are still used today on vehicles.

As for how the list will perform – I am not really sure. Veteran tanks with high AT guns are normally a good option in Flames Of War, and American artillery is quite powerful thanks to the Time on Target National Rule (another thing the Israeli artillery should not really have), but it is still a fragile force that will not like coming across 20 T-34/85s – but then I guess that is something that historically they would not have been keen to face either!

Once I have the last of the vehicles assembled I’ll take some photos of the work in progress.
Posted by Wargamer on Tour at 10:07 PM 2 comments:

This afternoon I popped out to one of my local gaming clubs for a game of X Wing. So far I had managed to play one test game with Phil at work, and another quick intro style game with some friends. In theory this would be the first "real"outing.

I borrowed Darth Vader off a friend and added in 4 other Tie Fighters (“Mauler Mithel”, "Backstabber", "Winged Gundark" and a Black Squadron Pilot), facing off against Horton Salm (the Salami to his friends) with a seriously pimped out Y Wing, alongside two more unnammed Y Wings (aka the Dumptrucks - they have lots of shields and hit points).
So, what did we learn... it takes more than a couple of Tie Fighters to knock over a Y Wing (aka the Dumptruck), in fact the best course of action might have been to fly together as a tight unit pouring fire on to one target as each of the Y's were out of shields and taking damage, of course that does not matter when you run out of guys to shoot at them.

Another good lession was that rolling lots of blank faces on the dice normally results in bad things happening... Darth seemed to be very adept at rolling three jinks or three blanks and nothing in between!

Either way I was great fun and the game was over in about an hour. With a bit of luck my Tie Advanced (with Dark and co) will arrive in the next day or so, letting me noodle up another force to try to take on Dan's Salami Dumptruck Squadron.
Posted by Wargamer on Tour at 10:02 PM 2 comments:

I think we will call it...BrimbleCon!

A few days ago I was discussing the state of Auckland gaming and making the observation that our gaming bretheren in Wellington do not know how lucky they have it (at least from the outside looking in). The Warmachine crowd is filled with good blokes, the FOW guys are great, and the rest seem organised and on the same page. Sometimes I wonder what that must be like..... Over the weekend one of Auckland members of the Warmachine community ran the first of what will hopefully be a regular event - Auckland Steamroller 2012, or as we all now know it, BrimbleCon 2012 - in an attempt to get our local gaming scene all back on the same page.

My plan was simple, I'd find a force that I wanted to take to Ides of March next year (another new tournament happening in Auckland) and use BrimbleCon as an opportunity to see if I liked the list. I settled on the new pButcher tier list from NQ:
The Butcher of Khardov
- War Dog
- Juggernaut
- Juggernaut

Yep, it was Irong Fang-tastic! We played four games over the course of the day which was more than enough given my newborn baby addled brain was really suffering by the end of the day...

Round 1: Chris Baker with Ossyan and a kitchen sink of infantry and solos. Chris is a master of board positioning and the game ended up with Butcher standing in the scoring zone with dead Mage Hunter Assassins, waiting for the next enemy to come and play when he found himself pushed out the scoring zone. Whoops!

Round 2: Jason Brown with pSkarre, a Kraken and Wraith Engine. We had a great fight - Kovnik Markov let the side down badly by missing the Wraith Engine (double 1's) on the charge. The Wraith Engine would later find itself dining on Butcher...

Round 3: Daryl Painter with Venethrax, Bile Thralls and friends. Daryl's list seemed like a great counter to mine, clearing out my IFP with corrosion, my Manhunters were the stars on the day killing a 'jack and working their way round into the backfield. Daryl unfortunately forgot that the Butcher was a tough nut to crack and threw Vene in to him, needless to say Butcher same out on top!

Round 4: Glenn White with wall to wall Dwarves. For once I actually felt like I understood my opponents army (having run very similar lists in the past. This game was a real grind-a-thon as I felt like I was on top the entire time, which resulted in me playing fairly cautiously to try to make sure I did not end up losing it. In the end my IFP's managed to grind down his 'jacks and opened the way for a Juggernaut to introduce his axe to Gorton's face!

Two wins, two losses - better than most of my efforts. The games were great for getting to understand my list, as well as pointing out that pButcher with Iron Flesh and a bucket of focus is a tough nut to crack!

For the results check out the Thrallblacks site...